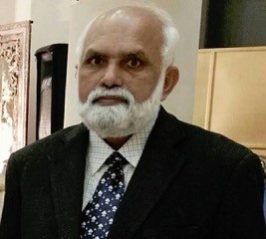 Muhammad Saleem graduated from Quaid-e-Azam Medical College, Bahawalpur, Pakistan in 1985, did his post graduate training FCPS (Paedaitric Surgery) from the department of Paediatric Surgery Mayo Hospital, Lahore and was awarded FCPS (Paediatric Surgery) in 1995. He has done Masters in medical education (MME-HPE) from The University of Lahore in 2017. He was first appointed as Senior Registrar Paediatric Surgery at The Children’s Hospital and Institute of Child Health (CH & ICH) Lahore in 1996. Then he was promoted to Assistant Professor Paediatric Surgery at Bahawalpur Victoria Hospital, Bahawalpur. Then he moved back to the CH & ICH, Lahore where heserved as Assistant Professor for next eight years. He was promoted to Associate Professor in 2008 and served the community for next two years in this capacity. He was selected as Professor of PaediatricSurgery and was appointed to Shaikh Zayed Medical College, Rahim Yar Khan in 2010 . in 2013 he moved back to CH & ICH, Lahore as Professor of Paedaitric Surgery/Chief of Surgery.

Professor Muhammad Saleem, Medical Director, The Children’s Hospital and The Institute of Child Health Lahore, participated to his utmost capacity in the development of pediatric surgical facilities through out his carrier in the province of Punjab. He remained continuously involved in the project of The Children’s Hospital & Institute of Child Health, Lahore in 1990s and was an active member of the team establishing pediatric surgery in this hospital. While working in Rahim Yar Khan he developed a new pediatric surgical department at Shaikh Zayed Medical College. He also contributed to establishing two new pediatric surgery units in Fatima Jinnah Medical University/Ganga Ram Hospital, Lahore and Allama Iqbal Medical College/Jinnah Hospital, Lahore.

He has also contributed a lot in the field of research and medical education relevant to pediatric surgery. There are thirty three National, twenty three International originals articles, one International Case Series, ten National and eight International case reports in his credit. He also participated and presented about 50 papers at different national & international conferences. He conducted & attended about 35 workshops and 18 intensive courses in pediatric surgery. He has trained a number of pediatric surgeons in Pakistan in his capacity of supervisor both for FCPS and MS Pediatric surgery. His trainees are now working as consultants through out country and abroad.

Currently he is working as Professor of Paediatric Surgery/Chief of Surgery and Medical Director of The Children’s Hospital & Institute of Child Health, Lahore. Dr Muhammad Saleem also served as Dean of faculty of paediatric surgery at College of Physician and Surgeons of Pakistan (CPSP). He is a regular examiner in Punjab Public Service Commission, CPSP, and Different universities including University of Health Sciences (UHS), Kind Edward Medical University (KEMU), Shaheed Zulfiqar Ali Bhattoo University (SZABU) Islamabad, and Punjab University (PU) Lahore. He is currently also the chairman of the curriculum committee for MS paediatric surgery & FCPS paediatric surgery. His special interests include hepatobiliary surgery, minimal invasive surgery and esophageal replacement.Dr Saleem has served and continues to serve the medical profession leaving a profound impact in this field.